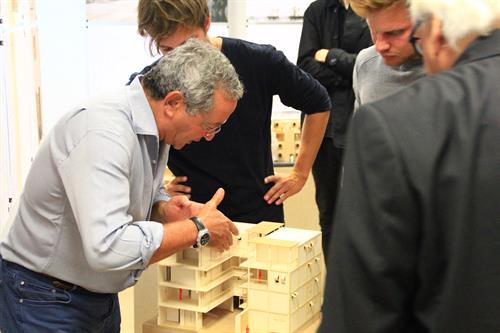 Students at the PBSA Düsseldorf majoring in architecture have supported the development of a district for refugees. In cooperation with the „Bund Deutscher Architekten (BDA)“, they undertook a complete urban planning and design in and for the Senegalese Baraka (a refugee slum in the middle of Dakar) on behalf of the YOU Stiftung. In addition, they created blueprints for the construction of fit-for-purpose residential buildings. Construction is expected to commence at the beginning of 2016.

“People from 14 different African nations live in this slum,” says Ute-Henriette Ohoven who initiated this project, “ and it is our ambition to help them to lead a self-sufficient life. We are trying to create conditions that will allow the residents to look after themselves once the project has been completed.”

The location of the slum in the center of the city makes it possible to draw on infrastructure that already exists such as crafts businesses, a growing number of start-ups and restaurants. The responsible parties look at Baraka as a pilot project from which other countries can benefit. The actual construction will be performed by Samih Sawiris (ORASCOM Development Holding), one of the largest urban planners from Egypt who will also shoulder advance financing needs. 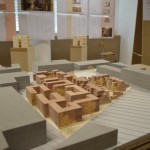 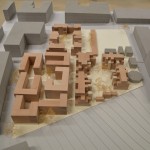 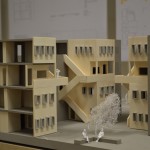 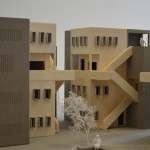 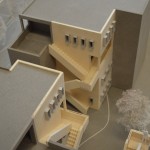 During their one week journey to Senegal students had the chance to form an accurate picture of the local conditions. This knowledge will serve as the foundation for subsequent planning activities and the design of a new quarter for 1800 inhabitants. Key challenge will be the fluctuation of the population and the accommodation of complex family structures. The buildings will house 8 – 10 inhabitants and will allow 6 square meters of living space for each of them. During the planning, infrastructural aspects such as access to electricity and water, as well as ecological and sustaintability considerations need to be considered.

Small teams of students will translate these requirements in several distinct proposals for building complexes that in their totality will form the new quarter.

Recently, the students presented their models to the president of the foundation, Ute-Henriette Ohoven, Claudia Jerger, the entrepreneur Samih Sawiris, and Bruno Braun (chairman of the BDA Düsseldorf). The students received unanimous praise and were rewarded with a new challenge: Samih Sawiris plans to construct additional residential builidings adjacent to the the new Baraka quarter that will be sold in the open market. Mr. Sawiris hopes that the proceeds from these residential buildings will help to finance the investment in the slum – and wishes to involved the students from Düsseldorf in their development. With 35.000 sqm, the total scale of the project hase now more than doubled. Everybody is now looking forward to the ceremonial laying of the foundation stone scheduled for November.