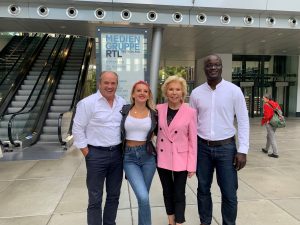 Evelyn Burdecki (2nd from left) winner of the TV show “Jungle Camp” realizes one of her dreams by supporting the building of wells in areas of Africa that otherwise would not have a water source – and she is supported in this endeavor by the YOU Foundation. To the right of Evelyn is YOU Foundation Founder and UNESCO Goodwill Ambassador Ute-Henriette Ohoven.

In the Volta region, many communities support themselves by farming. A hygienic and functioning water source is not only necessary for children and families but also for the planting of agricultural crops. Without these crops, the communities can not feed themselves nor earn any income. Unclean water or not enough water can translate into hunger and thirst for the people of this region. Furthermore, many children become ill because they do not have clean water to drink.

A YOU Foundation team begins their research phase in the area and visits eight villages that need drill holes for wells and speaks to the village leaders. “During the dry phase, there is no water to be found here,” says one of the community leaders as he points to a small dried out stream that has been identified as the village’s water source. Every morning and evening, the villagers come to this stream hoping to still find water.

Government has neglected this community since 1968

When the stream is dry, the entire village suffers from the lack of water. “We then have to begin looking for water elsewhere and sometimes we have to go as far as the stream’s source.” The search for water is not only time intensive, it also takes families and children on kilometer long journeys. “Usually, it is the children who will be sent to find water.” 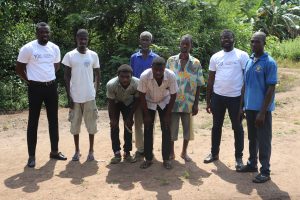 A YOU Foundation team researching villages and communities in the Volta Region.)

This community has been suffering for decades: “The government has not been here since 1968 to address our lacking water source.” In all these years, the villagers have suffered from the lack of water and have had to take care of the issue themselves.

Villagers hope for a better future

During the research phase in the communities, villagers begin to be hopeful and are looking forward to a better future. One where they will not have to suffer through the painful drought periods. “We thank you – Evelyn Burdecki and the YOU Foundation – very much for your support.”

Last year, Evelyn Burdecki participated in the RTL TV show “Jungle Camp” and stated during filming that she would contribute part of her winnings to the building of a well in Africa. When she won the TV shows prize money, she began work on making her dream a reality. Together with RTL and the YOU Foundation, two wells were built in Senegal. And now, villages in the Volta region are being researched for the drilling, management, and sustainability of building the next well. 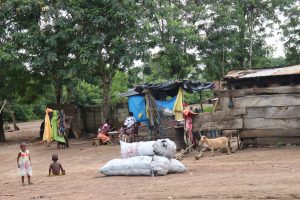 The lack of water supply in the community creates health risks for families and children.