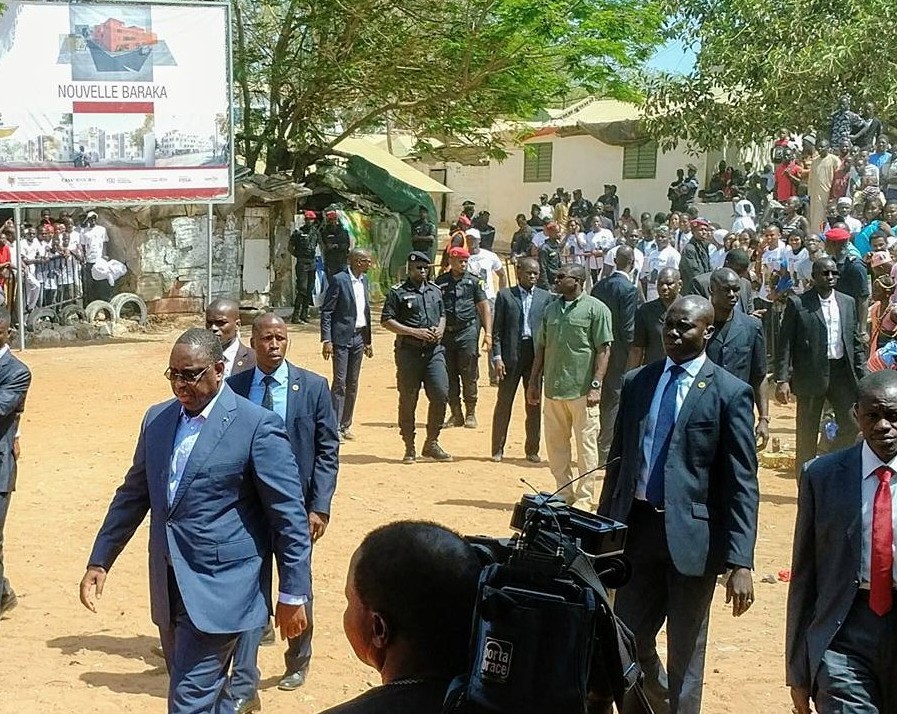 The people in Baraka will remember this day for the rest of their lives: The President of Senegal, Mr. Machy Sall, visited them in their slum in Dakar and expressed his joy about the improvements about to begin. 2000 inhabitants enthusiastically celebrated the President addressing them in their mother tongue Wolof. They know that substantial changes are on the way, and that he officially supports the project “Baraka – From Slum to Modern Neighborhood.” UNESCO Goodwill Ambassador Dr. h.c. Ute-Henriette Ohoven initiated this project to make sure that the people in Baraka enjoy basic human rights and financial freedom.

Together with a delegation of supporters, sponsors and government representatives, President Macky Sall and Ute-Henriette Ohoven visited the Baraka slum. The delegation included the German ambassador in Senegal, Dr. Renate Schimkoreit and Samih Sawiris (Cas Orascom), general partner and sponsor of the project. On a stage that had been set up over night, the President spoke to an audience of more than 2000 people and praised Ute-Henriette Ohoven and the You Stiftung for their tireless efforts to enable a better future for the slum residents. He stressed that Ms. Ohoven had asked him to build a mosque in Baraka despite the fact that she herself is of Christian denomination. In his mind, this was an important sign for religious tolerance and a demonstration of her understanding of Senegal. Macky Sall shared his appreciation for Ute-Henriette Ohoven’s and her daughter Claudia Jerger’s 26 years of engagement in Senegal and for Baraka in particular.

Meanwhile, the inhabitants find it hard to believe their good fortune: They celebrated the presidential visit in their slum and expressed their joy with posters and homemade t-shirts expressing their happiness. Time and again they chanted the President’s name, shouted and cried with joy. The beat of the drums could be heard far and wide. No longer refugees, they finally become true citizens of Senegal and can hope to live with dignity, They have been afforded the opportunity for a better life and have control over their future. 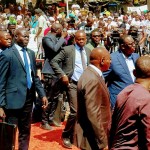 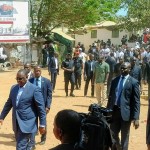 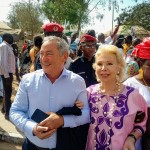 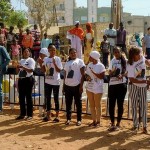 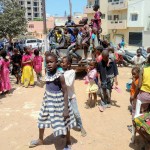 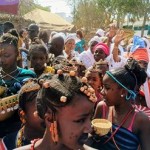 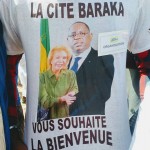 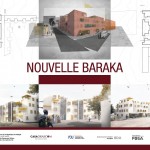 It will take some time until Baraka’s inhabitants can move from their huts into the new apartments with water and power supply, and until they will have jobs to earn their livelihood. At the moment, experts are performing a geological analysis of the grounds to determine their carrying capacity and to adapt all buildings accordingly. Construction is scheduled to commence after the rainy season. The master plan is the Grundlade für die baulichen Veränderungen.
Under the supervision of Professor Jochen Schuster and Bruno Braun, architectural students from a university in Düsseldorf spent months to conceive this plan tailored to local realities and the needs of the local community.

Information about Baraka: At present, Baraka is a slum in the middle of Dakar. For many years, Baraka has been supported by the You Stiftung. This chaotic settlement has grown for more than 20 years and has never received formal permits from governmental authorities. Refugees from many West African countries live here together with Senegalese families that were forced to flee from rural areas. The population of the surrounding quarters does not accept the people of Baraka and ostracizes them.
The You Stiftung and its project wishes to change all that. Soon, each family shall receive its own apartment. With the introduction of proper streets and access to water and electrical energy, life will become easier – and it will become possible to set up shops, offer services and establish small start-ups that allow parents to earn a modest living. A school and training center will provide education to children and young adults.
More information about our pilot project are on our homepage:

More information about our pilot project are on our homepage: http://you-stiftung.de/vom-slum-zum-vorzeigedorf/