Water and electrical supply are waiting for the would-be apartment residents in their new homes.

On October 29, 2020, Ute-Henriette Ohoven, UNESCO Special Envoy and Founder of the YOU Foundation, travelled along with her daughter Claudia Jerger, Vice President of the Foundation’s Board of Trustees, to Senegal to accompany the residents as they moved into the new apartments. 60% of the units are complete.

However, the water supply was not yet fully connected.  “It would have been irresponsible to allow people to move in without water in the new, very nice apartments,” explained the UNESCO Special Envoy.

For the people of Baraka moving into the new and modern apartments also means a time of adjustment.  It is the beginning of a new way of life, one that is being addressed with an awareness campaign. 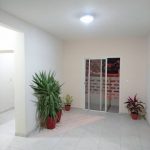 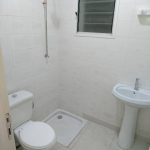 “Of course, the residents will be happy, especially the children, that they can take a long shower or sit on their own toilet for as long as they like,” says Ute-Henriette Ohoven. “But water costs money and toilets can get clogged. Cooking on a stove is also a big adjustment and there can be no open fires on the floors of the apartments.”

Because of this, care takers are being trained to ensure that certain rules are followed.  For example, they will make sure that garbage is not thrown onto the streets and that no chickens are held in the apartments.

All children in Baraka are now able to attend school

The expansion of the school was opened during a celebration attended by the donors Leon Löwentraut and Dirk Geuer of Geuer & Geuer Art. Also in attendance was Senegal’s Minister of Education, M. Abdoulaye Talla with his entire delegation.

“Through the expansion, a second floor was added to the school with two further classrooms enabling all of Baraka’s children to attend school and finish the educational cycle. The Ministry of Education will manage the school and will provide for the teachers and all the school supplies needed.” 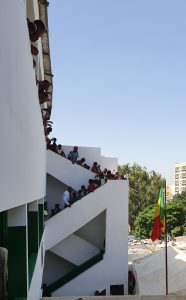 The next steps include the construction phase of 47 stores, businesses, and workshops. The people have been trained. “Baraka is moving into the next phase and we look forward to the next two years of the project until its completion,” says Ute-Henriette Ohoven.

“We thank all our sponsors for their very generous support.  I wish you all a peaceful and blessed Christmas and a good start in the new year 2020.”